Provide projections of the impact of the 1.5°C and 2°C climate change on health, including air pollution effects, in physical terms and as economic costs.

- Provide long-term pan-european gridded simulations of recent climate air quality pollutants (Ozone (O3), nitrogen dioxide (NO2), particulate matter (PM10 and PM2.5)) over the past 20 years, their projections under a “2°C climate” given a few compatible air pollutant emission scenarios, and the associated uncertainties.
- Identify uncertainty and assess adaptation options including costs and benefits.

WP
Lead
Title
Due Date
WP8
CNRS-IPSL
D8.1. Design and production of an ensemble of air quality simulations and evaluation of health impacts
31/03/2015

In addition to impacts and costs modeling of a global mean temperature increase of 2°C in WP6, this WP follows a purely risk oriented approach for the same sectors by generating established risk indicators such as Value at Risk (VaR). On the basis of a comprehensive damage data collection, by using advanced methods from actual science the results will be designed to maximize their usability for national and EU-wide risk transfer mechanisms and insurance. This focus on adaptive capacity as the EU’s societies’ capacity to financially manage the risks from climate change requires the employed risk measures to be compatible with current EU legislation, such as the SOLVENCY II (regulatory requirements for insurance firms) process. Also the concept of vulnerability in this WP necessarily deviates from that usually utilized and operationalised in climate impact studies, since it has to be compatible with the insurance perspective and strictly quantitative.

This WP will provide a sound scientific approach for estimating weather and climate risks and quantify the change in risk due to the changing climate signal by the above mentioned risk metrics. Bringing together state of the art techniques from stochastic weather index modeling, climate impact research and actual modeling of random phenomena, both aspects of risk (probability and impact) are assessed simultaneously. 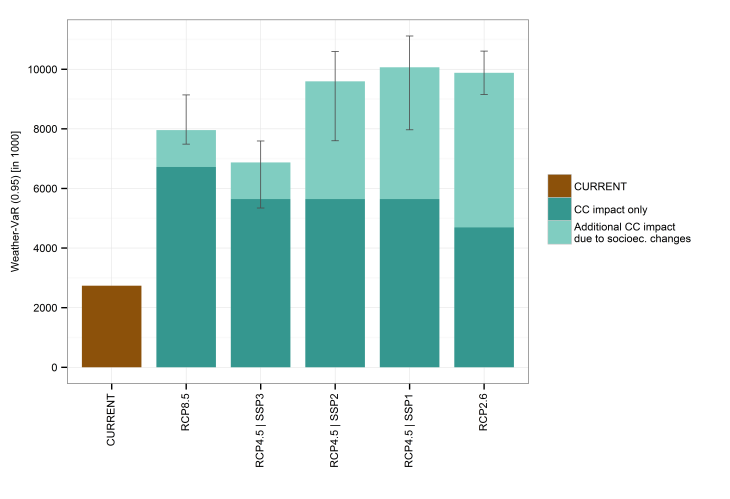 Figure 1: Aggregated Weather-Value at Risk (0.95) of winter overnight stays for all considered NUTS-3 regions in Europe. Error bars show the range of climate simulations (2 RCP2.6, 5 RCP4.5, and 4 RCP8.5). For RCP4.5 the impact of underlying Shared Socioeconomic Pathways (SSP 1 to 3) is shown in the different bars. For RCP2.6 simulations SSP1 and for RCP8.5 SSP3 is used.

We quantify the impacts of +2 °C global warming on winter tourism demand in Europe’s ski tourism related regions. Using time series regression models the relationship between natural snow conditions and monthly overnight stays is estimated. Based on these model results we quantify the risk of tourism demand losses due to weather variability and assess the potential impacts of climate change. Hereby, the concept of Weather-Value at Risk (Weather-VaR [α]) is applied, which represents for a given level of confidence (α) over a given period of time the maximum expected loss in winter overnight stays. Snow data are provided by the hydrological model VIC, which is forced by E-OBS data to obtain historical snow values for tourism model calibration and forced by EURO-CORDEX climate simulations to obtain snow projections until 2100.

Development of a methodological approach aiming at combining climate vulnerability, adaptation and risk.
- Assessment and projection of adaptive capacity at different scales as a function of human, physical, economic, social and human capital inputs.
- Assessment of climate vulnerability and risk associated with a 2°C warming for forestry, agriculture and ecosystems services for key hazards (drought and heat wave, flood, forest fire, windstorm) on a pan-European level.

The objectives of this task are:

To consider impacts from a cross-sectoral perspective, i) undertaking cross-sectoral analysis to link the sectoral pan-European analysis ii) focusing on particularly vulnerable areas in Europe, especially those that are subject to multiple impacts where cumulative effects may arise and iii) in relation to cross-cutting themes to address issues in an alternative way to the traditional sector analysis (e.g. water, cities and the built environment).

The task will also bring the impacts, vulnerability and cross-sectoral information together in a synthesis, allowing the integration of all the study findings in a consistent way, to provide some of the key policy outputs, providing succinct overview of the project.

This WP focuses on vulnerability assessment (exposure to climate change, sensitivity of the natural environment and society to climate change, adaptive capacity of the system) in African regions due to a global averaged surface temperature change of 2°C from pre- industrial level. This is explored through case studies for each of these various geographical and human contexts.
Specific objectives:

12.1 Evaluation of climate impacts on water resources, vegetation and crop productivity, energy production and flow regime of main rivers in North Africa and sub-Saharan Africa.
12.2 Improving adaptive management of the water resources (reservoir operation, irrigation) considering water quality and biodiversity.
14.3 Assessing the vulnerability of the system as basic information for sustainable improvement of water use and food production to be able to cope with climate change impacts increasing adaptive capacity.
12.4 Quantification and documentation of the uncertainties coming from either model inputs and/or model accuracy of impact predictions, crucial when being used to take emergency measures.

This WP focuses on climate change impact, vulnerability and adaptation due to a global averaged surface temperature change of 2°C from pre- industrial level for the Coastal regions of Bangladesh. 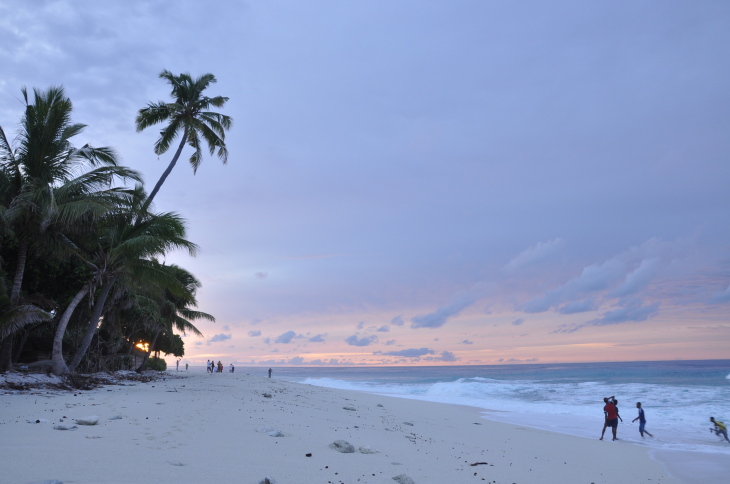 This WP focuses on climate change impact, vulnerability and adaptation due to a global averaged surface temperature change of 2°C from pre- industrial level for the Coastal regions of Small Islands.

Small, low-lying islands have been seen as highly vulnerable to sea-level rise since the issue of climate-induced sea-level rise was raised in the 1980s. Regional assessments have highlighted potential impacts - in the worst case leading to forced migration - and subsequently high damage costs. Urbanisation and especially migration to the capital city is widespread: presently around a third of the national population live in the capital -- Malé, making it one of the most densely populated cities in the world with 50,000 people/km2. But, with rising sea levels how will the Maldives cope? 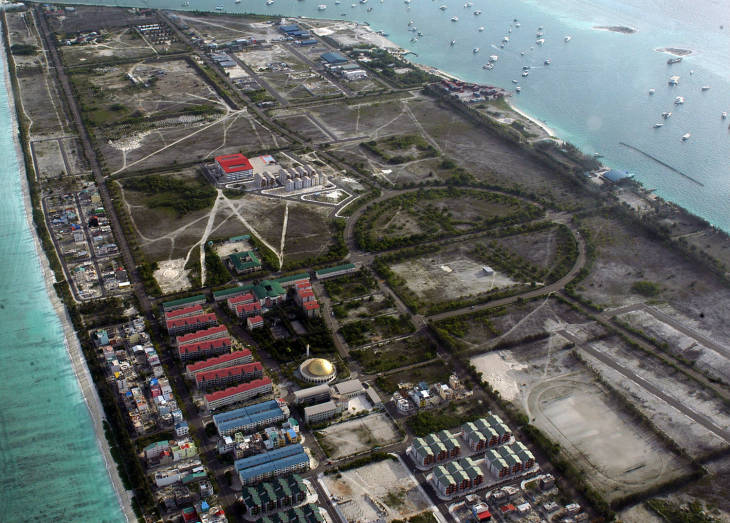 Hulhumale being developed to release the population pressure in the capital city of Male’. (From http://www.travelalltogether.com)

The Maldives comprises 1,192 low-lying coral atoll islands, located in the Indian Ocean, with elevations typically within 1-m of current high tides. 200 of the islands are inhabited. The islands are economically dependent on international tourism and fisheries. The Maldivian Ministry of Environment and Energy, together with the University of Southampton, UK and Global Climate Forum, Germany are assessing the impacts of sea-level rise, focusing on a relatively new artificial island, Hulhumalé.

Hulhumalé is a 200 hectare island claimed from a reef area during the late 1990s to relieve population pressure on the nearby capital city of Malé. Hulhumalé has experienced rapid and large population growth, reflecting the high demand for land and housing in this part of the Maldives. The island was built approximately 2m above mean high water, and has so far been safe from inundation.

Our study considers if and when the island may experience inundation due to extreme sea-level events and/or wave overtopping, and when this may occur with rising sea levels. We are:

(1a) Collating land datasets to define land elevations and associated assets.
(1b) Collating oceanic datasets to determine the frequency of extreme events (sea levels and waves), and selecting appropriate sea-level scenarios.
(2) Using an overtopping model (SWAB) developed by the University of Manchester, UK to determine volume of overtopping for plausible present and future events.
(3) Investigating what parts of the island could be inundated using LISFLOOD.
(4) Determining what infrastructure and assets on the island are at risk. Overtopping Model (SWAB)

Initial results indicate that relative sea-level rise from the tide gauge (extracted from PSMSL, 2014) nearby Malé is approximately 4mm/yr since 1990 – faster than the global average, although longer records are preferred. Globally, sea-level rise is expected to accelerate, with up to approximately 1m of rise by 2100 (taking a high-end scenario from Church et al. 2013). This trend would be expected in the Maldives. Mean Sea Level Malé, Hulule 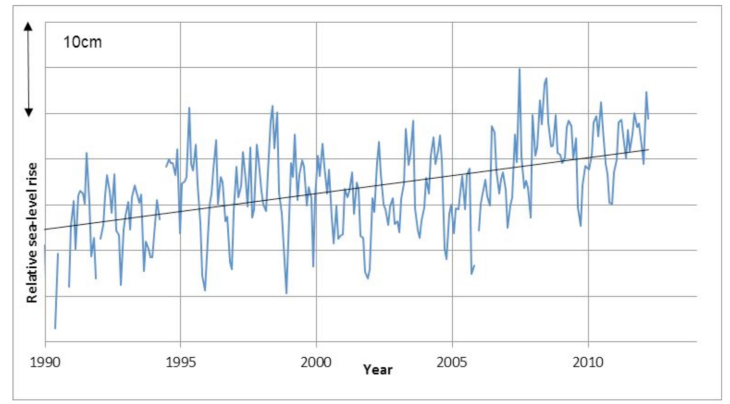 Two particular events which caused flooding in 1987 and 2007 were due to long period energetic swell waves, the latter generated off the coast of South Africa. In the 2007 event, Malé was flooded, but Hulhumalé was flood free. Using this event as an example of an extreme event, we are assessing how overtopping could change with sea-level rise. Initial results suggest that under swell/surge conditions, it could take tens of centimetres of sea-level rise before overtopping occurs. 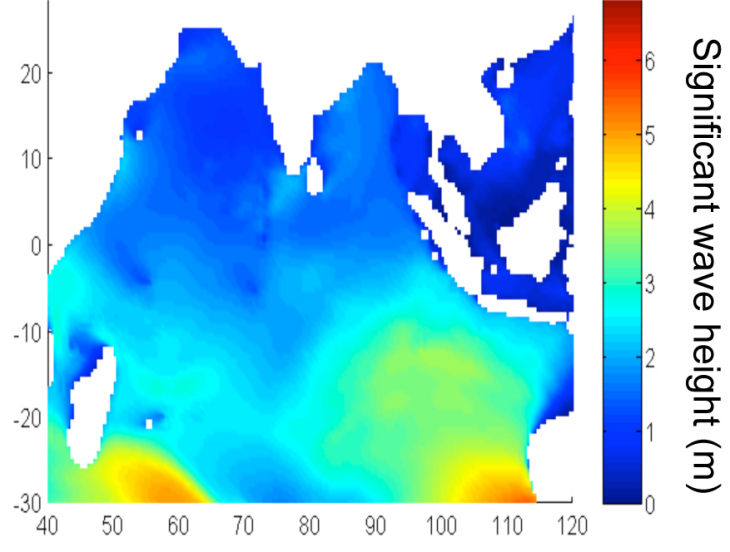 Example of significant wave heights in the Indian Ocean, May 2007 (data extracted from WaveWatchIII)

In our future work, we will better quantify our initial results, and also consider the role of adaptation. Adaptation, such as building sea walls or replenishing beaches could help to reduce impacts. As sea-level rise has significant inertia and will continue even if temperature rise stabilises (the so-called commitment to sea-level rise), we will consider changes beyond 2100 if possible.

WP
Lead
Title
Due Date
WP14
SOTON
D14.1.Estimates of impacts and costs of sea-level rise for the selected climate scenarios
31/01/2015

The main objective of this work package is to disseminate research results and to raise awareness of society and policy makers towards impacts of climate change and needs to act. In order to reach the different actors in society and decision makers, the project will provide end-user tailored project information, training and knowledge dissemination in different formats/approaches: The project will
- Stage summer schools for (young) scientists.

- Deliver (training) workshops, conferences and possibly side-events to promote the exchange of scientific results from IMPACT2C among scientists, stakeholders and multipliers, such as journalists.

- Facilitate the participation in the summer schools and workshops of all EU members as well as the non-European countries participating in the project.
- Develop a website with details on the IMPACT2C project, as well as the progress of the different WPs (in close cooperation with WP1).
- Generate project dissemination materials: Create an atlas of the main results of IMPACT2C (e.g. climate change, impacts, and vulnerability, risk and cost maps), provide headline news, policy briefs and fact sheets, and promote the submission of peer-review manuscripts concerning the results of IMPACT2C.
- Cooperate with the Media for dissemination.